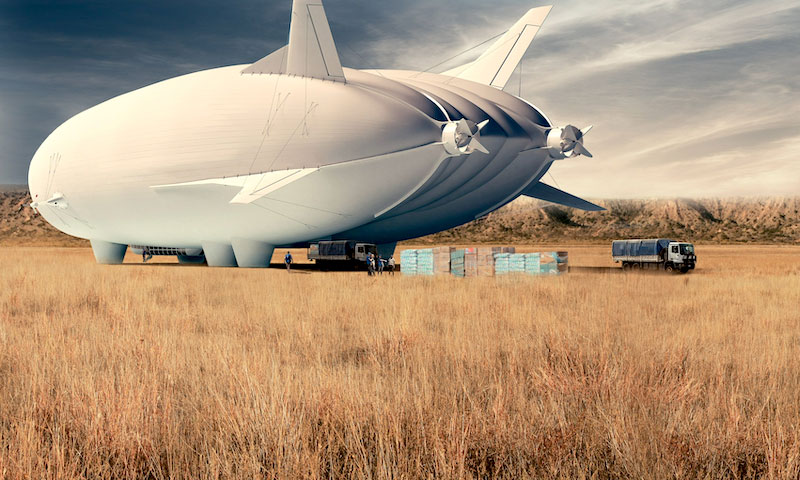 Airships were once a common sight in the skies above America, Europe, Asia, and Australia. Airlines used these giants of the sky to convey passengers and freight across vast distances, while militaries used them to patrol vital sea lanes to provide early warning of trouble and a persistent deterrent to enemies. Explorers even used them to venture to places otherwise unreachable such as the North Pole.

Now fixed-wing, jet-powered airliners dominate air travel, but they’re a difficult technology to decarbonize. As the world looks to reduce emissions and consumption of fossil fuels, airships are getting a second look, specifically hybrid airships.

U.S. Marine Corp Capts. Benjamin Cohen and John Schmaltz Jr. initially stumbled across hybrid airships due to a different aspect of the climate crisis: wildfires. Around the time they began attending the Naval Postgraduate School (NPS) in mid-2020, the August Complex fire began burning in Northern California. They wondered if there were better ways to help put out the flames, and this led them to one of the many uses of hybrid airships. Their thesis, published in March 2022, ended up being a guide to help the DOD integrate a large-capacity mobility platform, through the example of a hybrid airship, into its fleet by partnering with the commercial sector, where hybrid airship innovation is occurring.

“We realized there’s a whole lot more we can and should do with this, so our thesis includes not only an analysis of the aircraft performance and how the DOD’s potential procurement of these aircrafts would affect the development cost and operating costs over time, but also when is the appropriate time for the DOD to join the process,” Cohen explains.

The students, with help from their advisors Drs. Nick Dew and Eva Regnier of the NPS Department of Defense Management, looked to modernize DOD’s approach to working with the commercial sector from just buying prototypes to developing a longer-term relationship with innovative companies. They specified in their thesis that they want the atlas to be a living document that “should be edited, adjusted, and improved as a technology proceeds forward.”

Cohen and Schmaltz presented the emissions-reduction aspect of hybrid airship technology as the second presentation in the Net Zero Briefings series presented by the NPS Climate and Security Network.

Hybrid airships are part of the “lighter-than-air” aviation family, which get their lift from helium (not flammable hydrogen like the Hindenburg.) Hybrid airships get their name because they combine conventional airship design with aerodynamic attributes, which give them forward momentum. Without it, the ship slowly sinks back down to Earth because the payload makes the airship a bit heavier than air, so it doesn’t just float up like a balloon. Because energy consumption is only needed for forward momentum and not lift, hybrid airships produce 75 percent less carbon dioxide emissions compared to similar conventional aircrafts like the C-5 Galaxy, and airship companies are working to reduce emissions by 90 percent. They’re not as fast as competing airplanes but they are faster than most sea-going vessels, thus creating new options for environmentally friendly ways to move cargo that is needed in 48 hours, not five weeks.

Another important feature of a hybrid airship is that it’s able to land on any reasonably flat surface, not requiring any formal landing platforms or runways. They’re also quieter than comparable aircrafts, while still carrying heavy payloads. This could allow for stealthy and remote drop offs of equipment. Landing anywhere and carrying heavy payloads, with precision equipment and suppressants to engage fires, is what made hybrid airships look appealing for fighting wildfires.

“We don’t know where we’re going necessarily, so we don’t have supply lines established to service the old, expensive vehicles,” Schmaltz explains. “I saw value in the airship as a way to get things we needed where they need to go in a reasonable amount of time instead of waiting two or three months to get to certain locations to send out or receive parts.”

While there have been exploratory programs in the past, hybrid airships are not being used for military operations anywhere in the world right now, likely because they’re slower and the technology has only been fully developed in the past decade. The only lighter-than-air vehicles being used by the DOD are aerostats, which are smaller, low-level airborne ground surveillance systems used as radar platforms.

Hybrid airship innovation is taking off in the commercial space instead. Recognizing this, Schmaltz and Cohen worked with defense contractor Lockheed Martin and the British company Hybrid Air Vehicles (HAV), the latter having built and flown a full-scale hybrid aircraft prototype, leading to a Cooperative Research and Development Agreement (CRADA) with NPS.

“It was an ideal opportunity to work with the USMC and NPS to test the Airlander, modeling multiple scenarios to demonstrate how the aircraft could support missions in the Indo-Pacific command theater,” says Neil Gee, HAV Senior Project Manager.

As part of the CRADA, HAV and the NPS students created objectives they’d work separately and others they’d take on together. One project they worked on modeled multiple scenarios to demonstrate if and how the airships could support stability in the Indo-Pacific command theater. They found that the hybrid aircraft could decrease the travel time for infantry and equipment and reduce associated emissions in the process. Beyond improving logistics chain responsiveness, the group also recognized that hybrid aircraft could be used to provide humanitarian aid, disaster relief, and remote research. HAV gained access to more weather data to expand their databases and they were also connected to Faculty Research Associate Christian Fitzpatrick and the NPS Modeling, Virtual Environments and Simulation (MOVES) Institute, who they are still working with today.

Since NPS prioritizes bridging academics with operational applications, both parties learned a lot from each other in the process. The students gained a better understanding of the commercial process of producing a hybrid airship from the prototype to production phase. And Schmaltz and Cohen’s research sharpened HAV’s focus on the digital technology side, like producing a digital twin, which is a virtual representation of an object or system that spans its lifecycle.

HAV brought the University of Sheffield Advanced Manufacturing Research Centre (AMRC) into the project to help improve their understanding of digital engineering, augmented reality for maintenance and operation support, and generating 3D virtual reality environments to improve production efficiency. The NPS students and HAV staff learned there were many more industry uses for digital twins than they initially thought. The relationship between AMRC and NPS will likely continue beyond this thesis project.

Forming all these partnerships was good preparation for Cohen for his current assignment. After graduating, Cohen moved to Southern California to lead the NavalX SoCal Tech Bridge, which works to form partnerships between the Naval enterprise and the commercial sector in and around San Diego. HAV plans to continue research work with Cohen through his new role. Schmaltz now works as a program analyst for Deputy Commandant, Programs and Resources, a role that he found he is well prepared for because of his research efforts on hybrid airships.