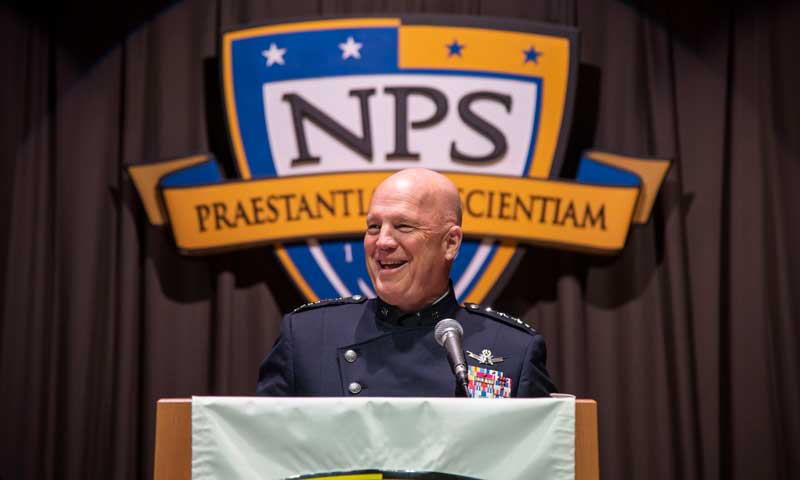 Recognizing the accomplishments of the most recent graduating class, the Naval Postgraduate School (NPS) celebrated its 2022 Spring Quarter graduates, June 17, during a commencement ceremony held in King Hall Auditorium with family and friends, as well as NPS faculty and staff, in attendance.

U.S. Space Force Gen. John W. “Jay” Raymond, Chief of Space Operations, served as the keynote speaker for the ceremony honoring 343 graduates, including three Guardians and 18 international students from 11 countries. Raymond also had the opportunity to tour the campus prior to graduation to see firsthand how NPS creates critical thinkers and innovation leaders in support of the Department of Defense’s space mission.

Kicking off the ceremony, NPS President retired Vice Adm. Ann E. Rondeau addressed the graduating class along with their families and friends, noting that NPS is home to the learning, exploring and discovery that shapes warrior-scholars.

In her remarks, Rondeau discussed the university’s own legacy in space, noting that 44 NPS alumni have become NASA astronauts – more than any other graduate school in the world. She acknowledged NPS’ Space Systems Academic Group for its extraordinary work in preparing students for careers in space-related fields.

“Our Space Systems Academic Group, which celebrates its 40th anniversary this year, has provided a clear avenue for many officers from the Navy, Marine Corps, Army, Air Force and now the Space Force to become space professionals through rigorous curricula focused on space systems engineering and operations. One of those officers is our very own Secretary of the Navy, the Honorable Carlos Del Toro,” she continued.

Rondeau reminded the graduates that they must keep sharpening their tool kit, citing a quote by basketball star Stephen Curry of the NBA champion Golden State Warriors.

“Win, lose, whatever it is, wherever, however you play, you have to keep coming back to the well to keep sharpening the toolkit and finding ways to evolve your game,” she quoted.

“It's about leadership, about knowledge that needs to be continuously refreshed and affirmed,” added Rondeau. “So, ladies and gentlemen and our warrior-scholar students, my comment is that our nation needs us to lead. And we will do that.”

With that, Rondeau turned the podium over to the ceremony’s commencement speaker to a sea of applause. Raymond addressed the graduates, talking about the issues they will face and how NPS has enabled them to meet our national security needs.

“Solutions to the many challenges to our national security will require analytical thinking and creative problem-solving … Luckily, as graduates of NPS I know we can count on you for answers,” said Raymond.

Drawing similarities between NPS and the Space Force, Raymond spoke on how they came to be when the U.S. Navy and national leaders, respectively, recognized growing threats and the need to counter them. Continuing down that trail of thought, he mentioned how the Navy and Space Force work in environments that are global, shared between nations, rich in resources, and critical habitats for our prosperity and security.

“As a global power, it’s no surprise the United States is both a sea- and a space-faring nation,” said Raymond. “The two domains share a certain allure — a sense of mystery. The ‘wine-dark sea,’ in Homer’s words, calls to us… whether it’s the vast, deep oceans or the infinite skies above.”

Raymond continued by stressing the importance of NPS and the role its graduates play in the defense of our nation.

“This school’s focus on technical knowledge and hands-on expertise is unparalleled,” noted Raymond. “And this technical focus allows you, as a graduate, to drive the pace of change because you understand at a very granular level what is possible and what is not, both tactically and strategically. The Naval Postgraduate School educates you on how to think and analyze a problem; this provides profound value to our entire joint force, and to the Space Force in particular.”

Raymond finished his remarks by reminding the graduates to embrace the change and remember their own and their service’s values.

“Center your values in everything you do. Lead the people whose lives America has entrusted you with integrity and with humility; never ask them to do something you wouldn’t do yourself,” said Raymond. “Finally, and most importantly, be a good person. Treat everyone with dignity and respect.”