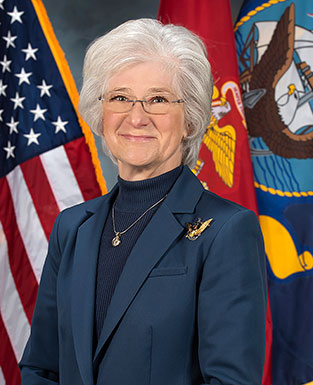 Retired Vice Adm. Ann E. Rondeau was appointed as President, Naval Postgraduate School on January 29, 2019. She brings to the assignment an unparalleled record of leadership and achievement within the military and academia in the areas of education, training, research, executive development, change management, and strategic planning. Prior to her appointment, Adm. Rondeau served as the sixth president of the College of DuPage. Her most recent military position was as the President of the National Defense University, a consortium of five colleges and nine research centers in Washington, DC.

Rondeau has extensive leadership experience in significant military and educational roles. In 1985, she was selected and served as a White House Fellow in the Reagan Administration and spent two years as National Security Advisor to the U.S. Attorney General.  She served in myriad command and operational leadership assignments, including ASW, Ops Intel, Fleet Support, Military Sealift, joint logistics, Installations Management and Training and Education.  In staff positions she engaged in plans, operations and policies, political-military affairs, military and maritime strategy as well as intragovernmental and interagency policies, projects and coordination and international military education.

As a Flag Officer, Rondeau served in leadership positions in installations and education and training as the President of National Defense University, Deputy Commander of the U.S. Transportation Command in Illinois, Pentagon Director/Chief of Staff for the U.S. Navy Staff, Commander of the Navy Personnel Development Command in Virginia, Commander of the Naval Service Training Command at Great Lakes, Ill., and Deputy for Shore Installations on Commander Pacific Fleet Staff.  Rondeau retired from the U.S. Navy as a three-star admiral in 2012 and was the second woman to have achieved that rank in the Navy. She then served as a partner and later an independent consultant with the IBM Watson group, followed by her present assignment.

Rondeau holds a B.A. from Eisenhower College (NY), an M.A. from Georgetown University (DC) and an Ed.D. from the College of Education at Northern Illinois University in DeKalb. She also holds an honorary Doctorates in Public Service from Carthage College (Kenosha, WI) and in Humane Letters from Rosalind Franklin University of Medicine and Science (Chicago, IL).