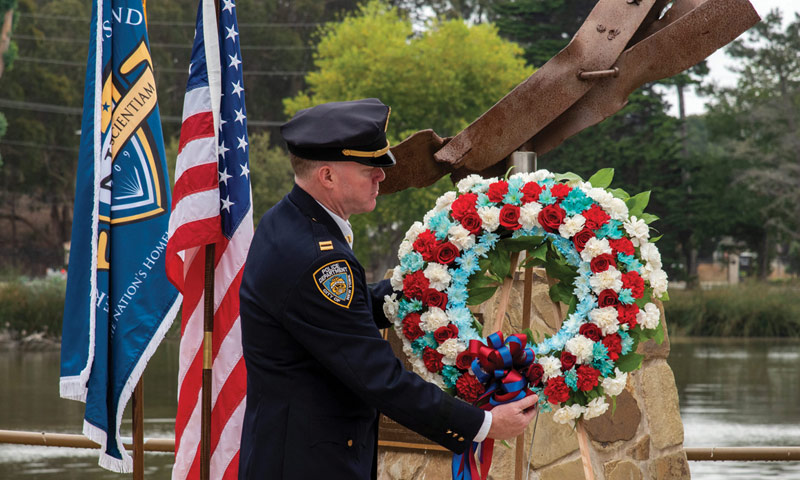 NYPD Capt. Brian Nyhus places a wreath at the 9/11 Memorial near the Naval Postgraduate School’s Centennial Park during a remembrance ceremony, Sept. 10, to honor lives lost during the terrorist attacks on Sept. 11, 2001. The 9/11 Memorial is built from a piece of steel rubble recovered from the World Trade Center.

Students, faculty and staff at the Naval Postgraduate School (NPS) honored the nearly 3,000 lives lost on Sept. 11, 2001, and the continued commitment of first responders and service members in the 20 years that have followed, during a reverent and uplifting ceremony, Sept. 10, in front of the university’s Herrmann Hall.

“Today, I welcome all of you because you are the faces of our nation,” said NPS President retired Vice Adm. Ann Rondeau as she addressed attendees from all the military branches as well as civilian faculty and staff. “On behalf of those who serve with great gratitude, we thank each other for this moment of standing here together and saying to America, ‘We are a great place. We are a great country.’”

While there are moments in the past 20 years that have cast a shadow of trauma, including recent events in Afghanistan, Rondeau added, “The honor of service, the honor of country, the honor of standing up for each other and for what we stand for as a nation that has done more good in mankind’s history than ever before, is what America is and today we stand strong.”

New York Police Department (NYPD) Capt. Brian Nyhus, an alumnus of NPS’ Center for Homeland Defense and Security, served as the keynote speaker for the remembrance ceremony. He described the aftermath of the attacks, and his experience as a rookie police officer helping with the recovery efforts.

“While it was a bright, sunny day in New York City, lower Manhattan was dark and everything was covered in concrete dust,” said Nyhus. “I saw the duty and bravery out there from a very close point of view. Rescue crews responded to Ground Zero and started doing the work. Iron and construction workers helped clear the remains of the buildings so people could do their work and help search for survivors.

“I also witnessed great acts of compassion from the public,” continued Nyhus. “Clergy and business owners turned out to provide whatever comfort they could to victims like hot meals and clothing to those who were driven from their apartments and therapy to those who were trying to help deal with what they had witnessed.”

Twenty years later, Nyhus reflected on the country’s recovery from the attacks that include the rebuilding of One World Trade Center, repairs of the Pentagon, and multiple memorials including a 9/11 museum erected over the footprints of the original towers in honor of all the people who passed. He also talked about the lingering effects of the attacks that still remain to this day.

“While the physical damage of those attacks has been repaired, the acts of those terrorists 20 years ago are still taking people’s lives,” said Nyhus. “First responders and residents of lower Manhattan have died from cancer due to exposure to toxic materials due to those recovery efforts. Over 15,000 have developed serious illnesses due to those recovery efforts. To be truthful to the phrase ‘Never forget,’ Congress passed the James Zadroga Act to provide medical care and compensation to the victims and families for years to come.”

Nyhus then acknowledged the sacrifices of the military who took the fight to the terrorists after 9/11.

“After 9/11, the United States military deployed overseas to two war zones in Iraq and Afghanistan,” he said. “Hundreds of thousands of service members endured long, dangerous deployments and hostile lands, fighting terrorists to ensure the safety of our country. As you know, some of these men and women did not come home making the ultimate sacrifice for the safety of their country.”

No matter how many years have passed since 9/11, Nyhus called on everyone to continue remembering those who were lost that day.

“Today and on the 20th anniversary of the attacks, I ask you to not only remember those who died on that day, but to those who have fallen since then,” said Nyhus. “I ask you to seek out those who are still being affected by the attacks and help them. Please, never forget all of the victims of 9/11.”

The generations of Sailors who attended the ceremony took heed of Nyhus’ speech.

“I’m very proud to be a part of this ceremony, which remembers those who perished that day and in the years that followed,” said NPS Dean of Students U.S. Navy Capt. Brandon Bryan. “I was a fairly young lieutenant on Sept. 11. At the time, I didn’t fully understand what it meant to serve in the military with the emphasis on the word ‘serve.’ Since that day, and all the things that our country has been through and how we as a country responded to those attacks, I truly understand what it means to serve this country and I’m very proud to be able to do that.”

“I feel honored to be a part of the ceremony and being able to have a role where I am honoring those who have lost their lives in an incident that shook America,” said Yeoman 2nd Class Keyston Braxton, one of the honor guard members who folded and presented the American flag during the remembrance ceremony.

“As someone who was too young to remember the actual event, I still have an empathetic heart for all of the victims and service members who lost their lives. The folding and presenting of the American Flag honors the dead, and I am grateful that I was able to do that today."

After performing a flag ceremony and wreath presentation outside Herrmann Hall, the remembrance ceremony moved to NPS’ Centennial Park, where a piece of steel salvaged from the rubble of the World Trade Center towers stands as a dedication to those who lost their lives during the attack 20 years ago.

Accepting a wreath from Sailors, Nyhus placed a wreath at the steel memorial. Beneath that memorial lies a plaque with a message that rings as true today as it did the day of the attacks …

“These acts shatter steel, but they cannot dent the steel of American resolve.”