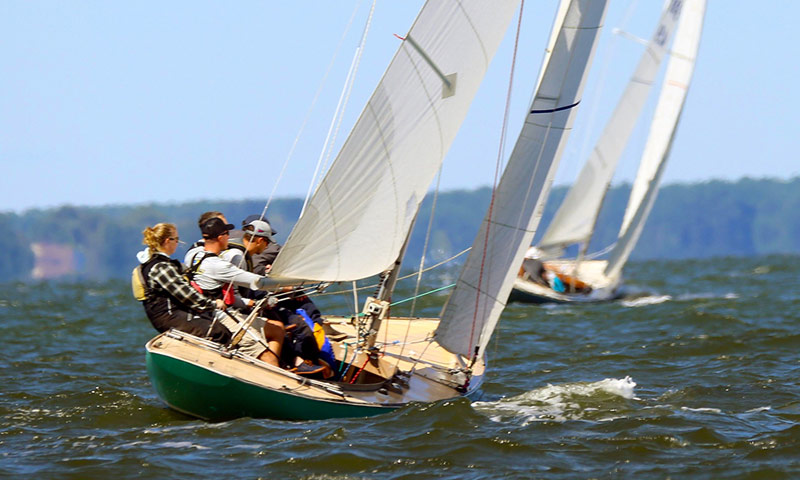 After only one sailing season of training together for the biggest national sailing race regatta of the year, a crew of both skilled and novice sailors from the Naval Postgraduate School competed against some of the most successful teams in their sailing class, the Shields racing keelboat.

As for the boat, the Shields, 30-foot International One Design, built mainly of fiberglass with teak wood trim, is a fractional sloop rig, and any sailor will tell you it’s the crew that wins races. Bbut the condition of the boat has a lot to do with winning too as the NPS crew found out over the course of three grueling and challenging race days.

NPS student Lt. Mitch Kempisty is the team skipper … He says that while the team relied on good tactics, fine tuning of sails, line handling, and having clear air, the equipment on their boat did have some issues. Out of town teams get to draw from loaner boats already staged at the hosting yacht club, Tred Avon, although teams provide their own certified racing sails. Regardless, the boat Kempisty’s team drew had not been in the water for a decade and was only made ship-shape weeks before competition. You might say they took it out on its “shakedown cruise.”

“While we have a great team of sailors, the sailing experience each of us brought to the races is a bit disparate compared to the other teams we faced at Tred Avon,” said Kempisty.

Kempisty had only learned to sail while attending NPS these past 18-months. But he is a quick study and a natural leader. He sought out dedicated, lifelong sailors to teach him racing tactics and then to join him for this year’s regatta with an eye on bringing NPS back onto the race scene as a strong competitor. It’s been years since an NPS team has competed at the national level under the club’s former name, “NPS Sailing Association.”

A benefit of sailing in Monterey Bay is the West Coast race season is longer than the east, starting in late February and running through October. This had given Kempisty’s crew time to improve coordination, sort out mistakes when they happen and learn from them, and go on to the next race. They’ve been racing against the Monterey Peninsula Yacht Club Shields Fleet which also sent two teams to compete at Nationals.

Team member, Lt. Tony Seda learned basic sailing at the Naval Academy and only recently sailed again beginning in April 2020. Seda was reluctant at first of sailing on the club’s Shields because he saw there was no motor on the boat.

“When I arrived at NPS, a friend asked if I wanted try racing, but I was hesitant at first because there was no motor on the Shields and I was unfamiliar with the boat’s rigging setup,” he said.

Seda works as the bowman, one of the toughest jobs on the boat, and confined to the foredeck. He’s perfect for bow work, small in stature and nimble. During the season, Seda earned a nickname for his performance.

“I fell in love with the thrill of riding and operating up on the bow and it became my permanent position,” said Seda. “I eventually got the nickname "The Bow Whisperer" as some issues with the bow would only seem to be fixed if I was the one fixing it. I would be able to solve it with little to no course corrections required from the helmsman. If you mess up either of these actions, you can seriously degrade the speed or momentum of the boat.”

The remaining crewmembers are all experienced sailors, and each have long lists of competitive sailing.

Marine Corps Capt. Jared Valeske , Lt. Molly Robertson and NPS Professor and Graduate School of Engineering and Applied Sciences Dean Ron Giachetti, the senior member of the crew, have all been sailing since they were youngsters.

Valeske was on USNA’s varsity offshore sailing team. He served as the Main trimmer during the Shields regatta.

Lt. Molly Robertson learned from her parents how to sail. She sailed on the intercollegiate sailing team at the Naval Academy too, and helmed the boat for the competition.

When the team arrived at Tred Avon, a cold, wet downpour and 15-knot winds greeted them. They plowed through the first two races. They placed 4th in the first race! But fell to 15th in the second.

On the second day of racing, the sun came out with vengeance as it got hot, and winds picked up too. After 7-hours of racing and three races later, the team placed 17th, 20th and 18th. Not bad for the new crew. However, the tide turned against them.

“We were plagued all day by a slug of a boat,” said Kempisty. “We worked throughout the day to identify the problem of why we were getting hawked down by boats from behind us on the same tack. Upwind was our problem where we lost on a lot of boats, but downwind we were always able to gain on a few boats. By the end of the day, we identified the issue as a lack of tribal knowledge of the course, non-optimized settings on the main sail and the sails themselves. Our sails are at least 5-years old compared to brand new sails our competitors were using!”

According to Kempisty, the 3rd and final day of racing saw lower winds at about 8-knots. They competed in one race, where they concluded a change in sail settings had to be made. It was the right decision. They placed 15th in that race and would place 18th overall.

“All things considered, we were competitive with the fleet, keeping the fleet tight with us in distance and performing competitive tactics with older experienced crews with better equipment. All things said, the crew is proud of what we accomplished and believe we did well and had a good showing,” said Kempisty.

Kempisty’s mission was all about establishing a presence for NPS and the Navy in the Shields Class Nationals, and to provide awareness to his colleagues at NPS that the NPS Foundation Yacht Club is back in business.  Sailing is alive and flourishing on Monterey Bay, he says, and with the club, it’s available to all military members for leisure or competition.

With pride, the team wore their Service uniforms during the post-race banquet and gained a ton of positive attention with the NPS presence at the podium.

With some fresh wind in their sails, Kempisty and team have established a standard for NPS’ participation in the Shields Nationals. If things stay on course, they believe there’s momentum and interest to compete at the next Shields Association, scheduled to be held in Newport, R.I.