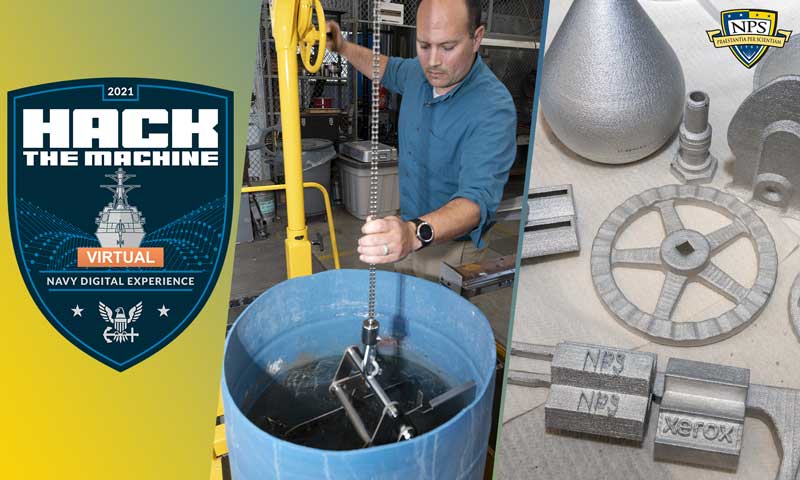 Using the on-campus Xerox ElemX Liquid Metal Printer, a team of eight faculty and one student from NPS took on the HACKtheMACHINE (HtM) challenge to design and fabricate a shipboard light fixture able to withstand rigorous shocks and vibrations of a navy ship.

A team of eight faculty and one student from the Naval Postgraduate School took on the challenge back in March using the on-campus Xerox ElemX Liquid Metal Printer to design and fabricate a shipboard light fixture able to withstand rigorous shocks and vibrations of a navy ship, a feat that earned the team the competition’s Design Inspiration Award, an honorary award for teams using a unique and practical approach to producing a part. As a control, every team in this challenge had to produce the light fixture bracket, but the judges decided it was the NPS team’s innovation in materials, manufacturing process and also the part’s durability that earned them the award.

Now in its sixth iteration, and sponsored by the Office of Naval Research, HtM was hosted virtually at the NavalX facility in Alexandria and brought together people from across the Navy Research and Development Enterprise, government, academia and industry to tackle some of the Navy’s most complex problems. This year’s HtM focused on three tracks: data science [public health related], metal 3D printing as it relates to shipbuilding, and maritime cybersecurity – its signature challenge track.

The “Heavy Metal” track challenge called for teams to accelerate the adoption of Advanced Manufacturing  (AM) using metallic 3D printing in the U.S. Navy. The track underscores how the Navy will be looking to metallic 3D printing capabilities to enable ships and shipyards to produce key components with the effect of shortening supply chains and meeting critical mission timelines.

Smith noted the goal of the competition was three-fold.

"For the team members, it is about growth and learning about new fields and technology. For students, it is going through an entire design cycle with the faculty and seeing what that involves and how much they can achieve in their other work. For the school, it provides a level of visibility to the Navy on the capabilities and depth and breadth of knowledge that resides here at NPS."

For MAE Research Associate David Dausen, collaboration is the main focus in these types of events.

"Everyone sees the challenge or problem in a different way and they come up with a solution together," said Dausen. "The participants are looking for that "Aha" moment which will define the work they are trying to achieve."

Recently installed on campus in February, the Xerox ElemX provided the team with the capability to make a competitive product for HtM. The ElemX uses aluminum wire rather than hazardous powders making the ElemX a much safer choice for users in shipboard environments. By heating up aluminum wire, which is melted to liquid form, the printer can then disperse the liquid metal by creating jet droplets that layer on top of each other repeatedly to make a product.

NPS student U.S. Navy Lt. William Kimberl, whose thesis research is in material science focusing on the fractography of the aluminum used in the ElemX, noted the team printed the bracket as a collective while he performed destructive testing of the initial light bracket validating the part had all mechanical properties, strength and durability they desired.

“The NPS community is comprised of many faculty and students with diverse backgrounds experiences,” said Kimberl. “Each person was able to contribute to the project in different, meaningful ways which led to a successful product.”

For students like Kimberl, this competition offers them a chance to apply their research into real world applications on a national playing field.

According to Dr. Amela Sadagic, Co-director of NPS’ Center for Additive Manufacturing, this effort was very typical for any interdisciplinary endeavor at NPS, whereas each person enriched their understanding of a technological domain.

“Once students graduate from NPS they will then become part of the adoption and application of additive manufacturing across the Naval domain,” noted Sadagic. “This award is a great recognition of the combined effort and input that everyone brought to this project. We hope that next year NPS will have several teams in all tracks of HtM Navy digital experience furthering innovative solutions for the Navy.”